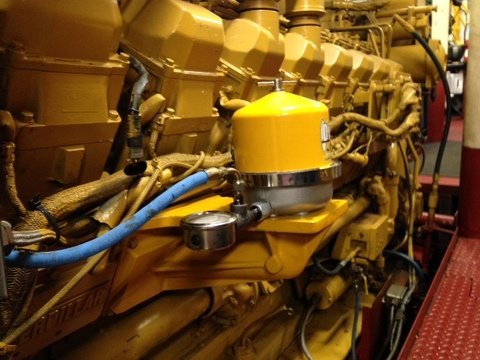 Bypass Oil Cleaning Centrifuge – 10x more cleaning power than a filter The pressure from your engine spins the centrifuge removing particles as small as 1 micron or less.

Bypass Oil Cleaning Centrifuge – 10x more cleaning power than a filter The pressure from your engine spins the centrifuge removing particles as small as 1 micron or less. Did you know that soot will enters an engines lubrication oil at the rate of .0048 oz for every gallon of diesel fuel burned? Burn 210 gallons you get 1 oz of soot in the oil. Burn 3360 gallons and get 1 pound of soot in the oil. A large truck will burn 1,786 gallons of fuel every 12,500 miles, at 7 mpg. During this 12,500-mile interval, more than half a pound (8.5oz) of soot will enter the oil. Your standard oil filter doe not catch most of this soot! Today’s engines have what is called a full-flow oil filter. These filters generally filter to 25 microns. Two things that you may not know are: (1) A 25 micron filter is only 80% effective, meaning 20% of particles larger than 25 microns are NOT held in the filter and go out to wear out your engine. (2)The other point is that the average oil film thickness between components in your engine is 5 to 20 microns. According to the SAE, particles as small as 4 microns can cause up to 77% of engine wear. The Dieselcraft Centrifuge cleans engine oil by generating a centrifugal force which is 2,000 times greater than gravity. Engine oil pressure spins the rotor at 6,000 rpm’s. That force separates the solid contaminates from the main oil supply while slinging the solids to the inside walls of the rotor, which is easily cleaned. Contaminant particles less than 1 micron are removed, eliminating the wear and tear on close tolerance metal parts by at least 50%. The Dieselcraft Centrifuge remove dirt and wear particles from the oil flow altogether and remains constant, whereas filters take out solids and hold them from circulating further, but plug, reduce oil flow, and eventually reach the point of not working. In engine applications, oil change intervals using conventional oil can be extended to two if not three times. With synthetic oils, oil changes can be extended over 40,000 miles or 750 hours. Replacement filters and disposal costs are also greatly reduced. Lab testing of oil is needed to determine the correct change interval for each application.

Centrifuge cleaning of most non-flammable waste and process liquids, from waste water to algae to bio-fuels to engine applications. For longer use, recycling or disposal.